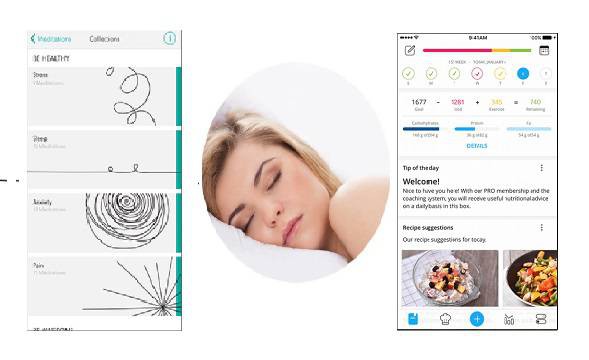 Sleep Cycle is an intelligent alarm clock that monitors your movement during sleep using the extremely sensitive accelerometer in your phone, it analyses the data and finds the optimal time to wake you up during a 30 minute window that ends at your set alarm time.

This app is the Best Apps on iPad 2016 in Austria, Denmark, Finland, France, Germany, India, Ireland, Italy, Netherlands, Norway, Spain, Sweden, Switzerland, Turkey, United Kingdom, and has also been featured in many top news sites such as CNN, the Wall Street Journal and the New York Times.

Sleep Cycle is free to try and has both Android and IOS apps.

With the Calorie Counter app by YAZIO, you can manage your daily food diary, track your activities and lose weight successfully.
It has a built-in barcode scanner which allows you to scan brand-name products to quickly look up thousands of foods. It helps to analyse and show your daily nutrition and track progress by log your weight progress and daily fitness activity which has more than 200 selections for sports.

YAZIO is free with In-app purchases and has apps for both Android and IOS apps.

There are more than 200 guided meditations featuring different teachers and styles. Focus on your intention or dive deep into a meditation topic with exclusive collections and courses.

Meditation Studio costs $3.99, and has both Android and IOS apps.