Get Blown Away by This Product 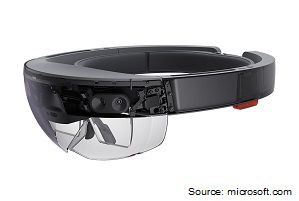 If you are a virtual reality fan, you need to check this out. Microsoft has released their product Hololens, development edition this year. Per Microsoft, Hololens is a pair of mixed reality smart glasses with a holographic computer, sensors, camera and speakers built into it. It contains more power than a normal laptop. The Hololens allows people to see, hear and interact with holograms. There is no external connection required. The consumer version of Microsoft Hololens has not yet been released, so you won’t be able to run a Hololens application yourself just yet, however you can check out the video at Microsoft Hololens site and prepare to get amazed by what you see. You cannot purchase Microsoft Hololens (Development Edition) from local retail Microsoft store, developers in Australia, Canada, France, Germany, Ireland, New Zealand, the United Kingdom, and the United States can order directly online from Microsoft Store.