Where Will Be the World's Largest Digital Market by 2018

The projections based on data from Statista’s Digital Economy Compass examine the competitive development of the platform business in eCommerce, eTravel and Digital Media. The four major Chinese players Baidu, Alibaba, Tencent, and Huawei have achieved impressive figures and are increasingly operating on a global level.

China will soon overtake the United States in the digital economy. According to calculations by analysts at Statista, Greater China’s digital market will outstrip the US market as early as 2018. As a result, China will be the largest digital economy before becoming the world’s largest economy.

Home grown Chinese tech firms like Tencent aren't well known in the West, but are serious contenders to social media brands like Facebook when it comes to monthly active users. While firms like Facebook are global players, Chinese rivals can tap into vast domestic potential. The chart below shows that China still has huge digital growth potential as many people in China still are offline and could be turned in to future users. 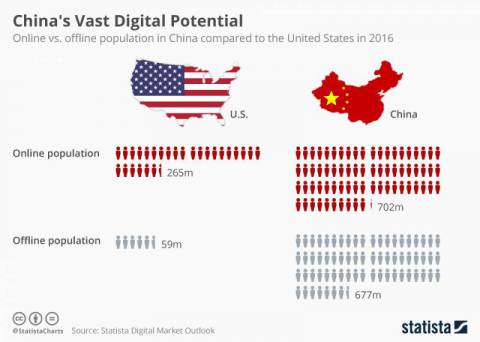 Tags:
technology
What are the favourite social networks in Australi...
The Future of Mobile Development
Please login to comment